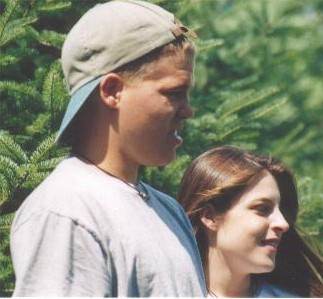 I remember that night so clear that it feels like just yesterday. It was approximately 3am when I received a phone call from a police women explaining to me that Kevin had been in a serious car accident and asking that I come there as soon as I could. It all happened so fast, calling his mother, driving to the hospital, and walking in to a nightmare. I've never had to
deal with such a tremendous loss in my life until that night. His mother, sister-in-law and myself were instructed to wait in the family room for the doctor. I remember sitting there, confused, and thinking that he was fine, this can't be happening to us, to me. As soon as we were told, I felt a numbness come over my body, and all I could ask was, "What happened?" "What are you telling me". I felt like I've never felt before in my entire life. Helplessness, shock, anger, loneliness, and there was absolutely nothing that I could do.

Kevin had been out that night with a five of his friends. Two of his closest, the driver, who was an acquaintance of his had been drinking at the bar they had been at. He was an inexperienced driver, let alone he was driving recklessly. They were on their way home, Kevin to me, when they missed the turn, in which the vehicle they were in went up on it's side and
began flipping in the air. We have figured that it flipped at least 3 or 4 times, coming to a rest in the grass. Kevin had been seated in the back seat, in the middle, and had been ejected through the sunroof, and therefore crushed beneath the rolling truck. He was pronounced dead at the scene, in which we thank God for. He didn't suffer.

Kevin was my best friend, boyfriend and other half for four and a half years. We were closer than anything that I had ever imagined. We had a love that I never thought I would find. He was the very best friend, son, brother, grandson, cousin, and uncle that anyone could ever ask for. He was honest, loyal, intelligent, kind and an all around great guy. He knew how to make people feel wonderful, just by his smile. His famous smirk we called it. He had the best and friendliest smile out of everyone I've crossed paths with. He was killed the day before Mother's Day, May 9,1998, and we celebrated his 21st birthday, June 12, 1998. I don't know how we have gotten this far, a year and a few months have passed, and he is missed so much. It is so hard to explain the special bond that we shared. We knew how to make each other happier than anything. He was my life, my first love, and when he died, he took a big part of me with him. We purchased a home in April 1998, and began our lives together. We were together 24-7, and enjoyed our time together very much. I am still very close with his family, and think of them as my own. It helps a great deal having them there with me. We have struggled a great struggle, and have come this far. He will always be with us, in our hearts and mind.

I love you honey,
Forever and Always,
Your Love, Julie
Until we meet again,
You are always in my heart XOXOXOXOXOX